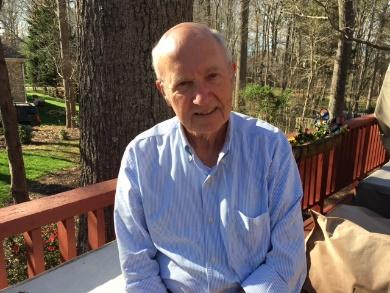 Geoff was born in the beautiful village of Westcliff-on-Sea on the coast of the UK’s River Thames.  After Senior School, he served a 5-year apprenticeship as a toolmaker with an emphasis on design at the Atomic Weapons Research Establishment.

With a spirit of adventure, Geoff & Fran moved to Cocoa Beach, Florida, and worked with GE and IBM as subcons to NASA and were part of the team that put a man on the moon.

Subsequent moves to Manassas, VA, Burlington, VT, back to Endicott, NY, Phoenix, AZ, Austin, TX & finally settling in High Point, NC.  That is right, IBM means “I’ve Been Moved”. But every place has been an adventure!

They have two daughters, Valerie in Oakland, CA, & Kathryn in High Point, NC.

Geoff is the immediate past President and enjoys being active in the community through Rotary and the fellowship that it offers to meet all kinds of interesting people.